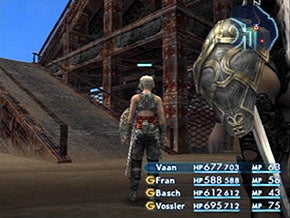 Continuing our Walkthrough for Final Fantasy XII The Zodiac Age. We’ll be covering the start of a new Hunt for the Wyvern Lord and making our way through the Ogir-Yensa Sandsea.

See the full write up on our site: https://30somethinggaming.com/dreadnought-leviathan-ogir-yensa-sandsea-final-fantasy-xii-the-zodiac-age/

You’ll arrive in the East Tanks area of the Ogir-Yensa Sandsea. As you walk forward you’ll trigger a scene, afterward, head to the north to find a chest, this one can contain a Bhuj. Two other chests in the area will have disappeared if you already claimed Sleep and Infuse in earlier areas. The last one containing a Wizard’s Staff can spawn on the western dead-end path of the first platform in the area. You can also steal a Bowgun from the Alraune enemy in this area if you are patient enough. Grab the maps from inside the Urn’s at the top of the ramp near the first platform and continue west towards the next area to trigger another scene.

Platform 1 Refinery
The next area is called the Platform 1 Refinery, there are 6 chests here that we need to try and claim gear from, one containing the Golden Amulet will only spawn once, so you cannot farm it sadly. Equip it to one of your reserve party members to double all LP that the entire party gains from every encounter. The chest with the Golden Amulet is found on top of the large structure to the north. A chest containing an Ancient Sword can spawn on the southernmost part of the map. Round Shield in a chest just north of where you got off the first platform. Windbreaker will spawn in a chest that is also on the large structure to the north, farming three of these will make the Wyvern Lord Hunt much easier. The chest containing the Killer Bow spawns to the west of the large structure, head onto the linked platform, and then head south, the chest can appear on this small area that links to the next platform to the south. Head onto the southmost platform after collecting the Killer Bow chest to find another chest on this platform, on the eastern side, that can contain a Wizard’s Hat. There is also the chance to spawn a Rare Game in this area called Pineapple, he won’t be any trouble for you to take down if he does spawn. Remember to head out and rezone to make the chests reappear if you want to farm any of the above gear.

For the most part, we will move through all of the areas on this map to collect the contents of the chests in each. If this is not something you want to do, skip forward to the Nam-Yensa section and head west to eventually reach one of the entrances to it.

East Junction
Take the northwest exit on Platform 1 Refinery to enter East Junction. Here in the section that is shaped like a “y” in the north, you can find a chest containing a Kogarasumaru Katana. At either end of the “y” shape, you’ll find another chest as well, these can contain the Healing Rod and War Hammer. The southwest most platform has a dead-end that can contain a chest with a Barbut inside. The sand area to the west can contain a chest with Chainmail as well. Exit to the northwest into the Primary Tank Complex once you’re done.

Primary Tank Complex
On the small branch path to the southwest of where you enter, you can find a chest containing Reflect Magick. The top row of three platforms has a chest on the middle one that can contain a Musk Stick. The top left platform can spawn a chest containing the Sirius, a gun weapon. In this area, don’t cast spells around the elemental enemies, it will cause them to become hostile and possibly wipe your entire party very quickly. One platform south of where you obtained the Sirius, can spawn a chest on the east side, containing a Wizard’s Robe. The southern platform that holds the exits to two other areas has a chance of spawning a chest containing a Linen Cuirass on its dead-end path. Once you’re done, take the southeast exit, near the Linen Cuirass chest to arrive in the Central Junction.

This optional Esper is available after you complete the Dawn Shard and Dreadnought Leviathan main story events!

How to get the BEST WEAPON EARLY ► https://www.youtube.com/watch?v=Y8PJbwf2efg

How to level up fast EARLY ►https://www.youtube.com/watch?v=vSdmKvBG1Jg

How to get POWERFUL WEAPONS Early ►https://www.youtube.com/watch?v=vRnkrB4mNHM